Broad beans, eaten raw or used in a variety of tasty recipes, are one of the many delights that Spring brings.

Full of beneficial properties, there are plenty of broad bean varieties. Italy's most popular variety is certainly the aguadulce, but all kinds of broad beans are grown throughout Italy, including speciality varieties which have become protected Slow Food Products, like the Leonforte broad bean (typical of Enna) and the Carpino broad bean (Foggia).

Broad beans are nowadays found everywhere in Europe and numerous testimonies have surfaced over time, showing that they have very ancient origins. They first appeared in Asia Minor and throughout the countries bordering the Mediterranean sea, with some discoveries suggesting that they were already being consumed in the times of Ancient Egypt. Broad beans arrived in Europe more or less during the Bronze Age, a period in which consumption by humans in the area is first recorded, actually going on to become one of the most important cultivated crops.

In the age of Ancient Rome they were consumed in all households, while in Mediaeval times they were used exclusively by the poorest classes, because they were cheap, nutritious and could be used in all sorts of different preparations. This is probably the very reason why broad beans were linked to various popular traditions in the Middle Ages. One of the most well-known dictated that on the night of the Epiphany people would make a cake with a bean hidden inside it. The person who found the bean in his or her slice of cake would be crowned the king or queen of festivities.

Use in Italian cooking

Despite the Mediaeval period being such a long time ago, broad beans are still used widely in Italian cooking. The fresh broad beans that are available in Spring are traditionally eaten raw, the main feature of a meal, dressed simply with extra virgin olive oil, or accompanied by cured meats and cheese. In central and southern Italian cooking broad beans form the base of many flavoursome, traditional dishes, often paired with pork, pancetta, lard and aromatic herbs.

Their use in creamy textured dishes is certainly not a recent fad. These dishes are a modern take on the ancient puls fabata consumed in large quantities by the Roman plebeian class, which consisted of a sort of soft wheat polenta served with broad beans. Among the most well-known recipes based on that dish, and still eaten in Italy today, we have macco from Sicily, creamed broad beans with chard and extra virgin olive oil, which now belongs to the PAT Traditional Italian Regional Food Products, and ‘ncapriata from Puglia, a puree in which broad beans are married with the bitter flavour of chicory.

In contemporary cooking broad beans are often paired with vegetables and other ingredients to create delicately flavoured creamed and chunky soups, highly appreciated by even the finest palates. And we shouldn't think that soups only work in the colder seasons. They make an ideal dinner in Spring, when the sun goes down and the temperatures are not that high. Neither do soups necessarily have to be eaten boiling hot. At lunch, they provide a tasty alternative to the usual salad, maybe left to sit after cooking and then served at room temperature, or chilled with soft cheese to melt into it, for an added creamy (and decadent) touch. 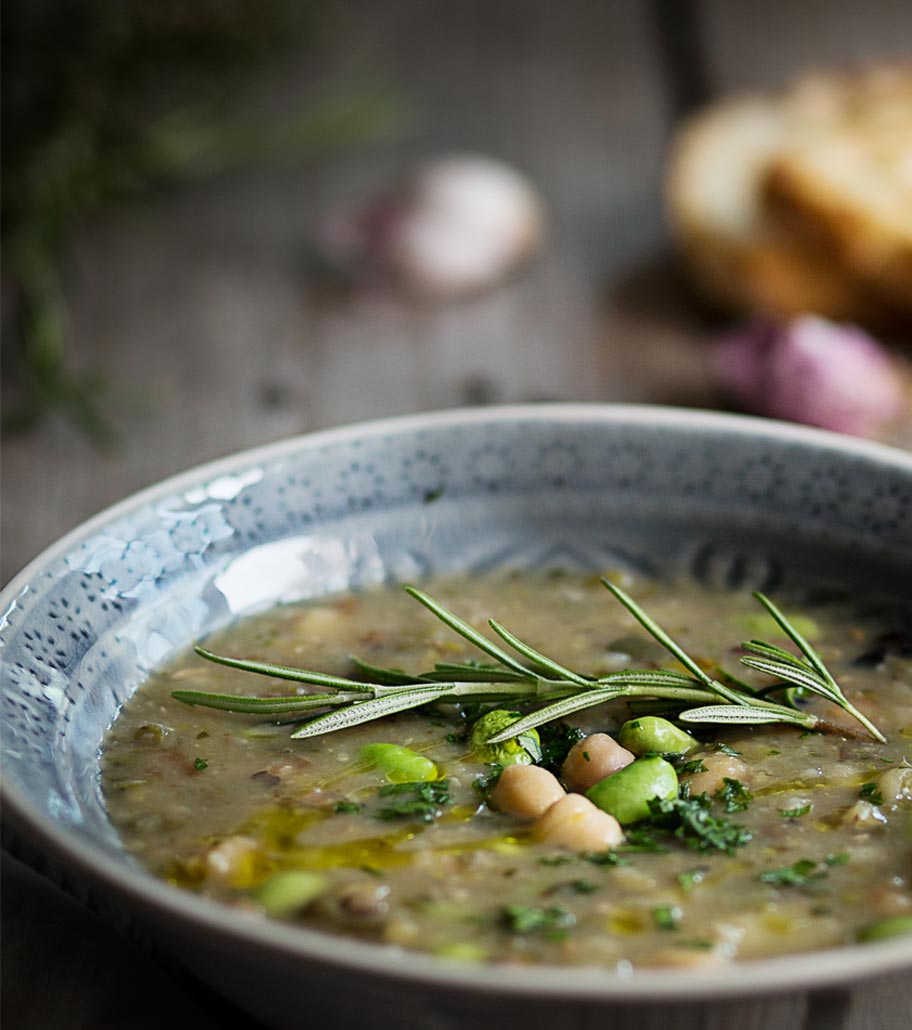