For this recipe we ought to prepare the Japanese mass, a compound created for meringues starting from the mixture. To create the Japanese mass, blend hazelnuts with half the sugar in the mixer until obtaining a fine powder, then whip the egg whites beaten stiff with the rest of the sugar. Mix the two compounds and form two disks on top of a baking tray covered with greaseproof paper by using a pastry bag. Bake at 200 degrees for 15-20 minutes. To make cream, soak gelatine in cold water, cook sugar with water at 120 °, whip yolks by pouring a trickle of syrup, until obtaining a light and foamy mixture. Melt gelatine by putting it inside the microwave for a few seconds and add it to the yolks, also add Ricotta while continuing to whip the mixture until it gets smooth and velvety. Mix whipped cream and pears. To compose the cake, place a layer of Japanese mass on the bottom, then place a layer of cream, cover with the second layer of Japanese mass, put it inside the refrigerator and let it set for a few hours. Sprinkle the surface with icing sugar and a few slices of pear before serving. 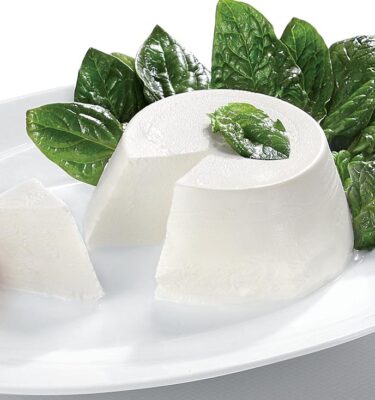